Boasting the “undisputed most popular and trusted bitcoin game in the world”, Primedice is certainly a site that believes in the minimalist power of dice gaming. While the site only has one main attraction, the bitcoin dice game, it provides this service in a clean and efficient manner. According to the ticker on the homepage, manages to keep its players entertained, and once you try it out, you can see why these players keep coming back for more. This is a great classic pure bitcoin game that everyone should try.

Pure bitcoin dice games are a world in and of themselves. They are very different from the typical Bitcoin casino, and they offer a very different gaming experience. Within the world of bitcoin dice games, there are a few that really are above the rest, because they have taken this classic game to the next level. This is exactly where Primedice excels. It knows that it provides one singular service, its very popular dice game, which is an evolution from the earliest bitcoin dice game. The site is very straight forward and you can start playing within seconds, just like bitcoin players expect to. Just choose a username and you’re good to go.

There is continuous action on the Primedice site with bets happening every second according to the page’s ticker. This gives it another great classic bitcoin dice touch that so many players out there are looking for. Primedice provides a very satisfying bitcoin dice experience that is likely to hook you in even after a few small wins. 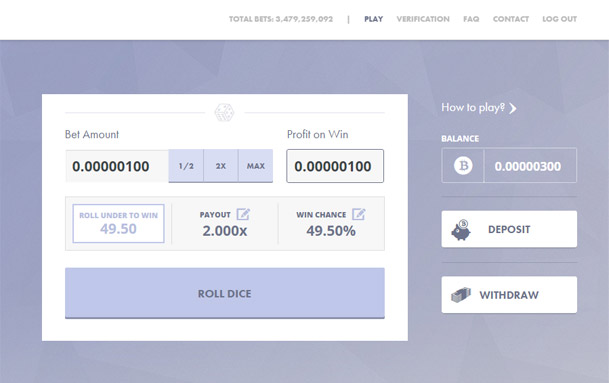 For anyone who is interested in Primedice but is still reluctant to make a deposit, the site offers its own bitcoin faucet. When your balance is at 0 you can enter into the faucet and get a little injection of several hundred Satoshi. While you will only receive coins from the faucet if you actually have an empty account, the real kicker is how the faucet increases as your player level does. The more you play, and the more you lose in order to fall back to zero, the more you can earn when you head back to the faucet. It’s a very smart move by Primedice to ensure an ever-growing cycle of play at their site. Of course, there’s no such thing as a free lunch, but getting those “free” Satoshi’s when you’ve come up dry is still a fun feature to have.

Another interesting perk is that in addition to earning affiliate commissions for players you send to Primedice, you can also earn money for reporting bugs on the site. Primedice claims that they have already paid 30+ Bitcoins in this regard so it is unclear how many bugs are still out there, but it could be an easy way to earn some dice spending money. 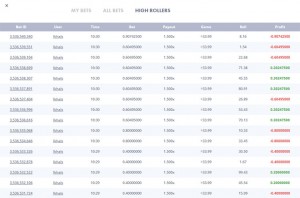 Primedice operates solely with Bitcoins. The maximum bet on the site is 5 BTC and the maximum payout is 40 BTC per individual bet. Banking with Primedice works very quickly – deposits are instant and generally withdrawals are processed within minutes. However, you must receive 1 confirmation for your deposit before you withdraw any coins.

Overall, there’s a lot to like about Primedice. The site has a great personality – there’s a joke as one of their FAQ’s – and it doesn’t try to do anything more than provide its simple service in an efficient manner. There is one game, and it works seamlessly. With an amazingly low house edge and the faucet to help you get back on your feet, Primedice does an excellent job at retaining its players, as well as getting more players to try it out. The site is very user friendly and streamlined, so if you’re looking to wager your Bitcoins on dice rolls, Primedice seems like a good place to start.